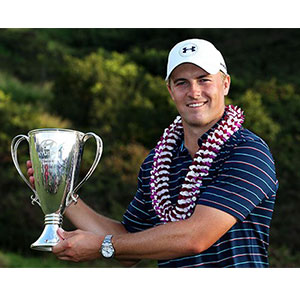 Jordan Spieth insists comparisons with Tiger Woods are premature despite matching his feat of seven PGA Tour wins before the age of 23.

It was a seventh win in 77 PGA Tour starts for Spieth as he picked up where he left off in 2015, finishing eight clear of Patrick Reed at the Hyundai Tournament of Hawaii.

Spieth closed out the tournament at -30, one short of Ernie Els’ record, though he still finished with three birdies in the last four holes.

The victory ties Spieth with Woods for the most victories by age 23 though, in his first 77 starts, Woods had already gathered 18 triumphs.

Reed came within a whisker of not dropping a shot all week, Spieth dropped two, when he bogeyed the par-5 15th on Sunday.

The last player to go 72 holes without a bogey and not win was Charles Howell III at the 2010 Greenbrier Classic.

Among many achievements Spieth led the field in strokes gained in putting, helped by being third best in proximity to the hole.

What Spieth said (of comparisons with Tiger): “I just think it's premature, but I'll say that probably my entire career. I know what he did and I just find it hard to believe that it can be matched.

“I'm proud that in this off-season and really taking quite a bit of time off during that off-season, our game seemed to be rounded into form.

"I'm still working on a couple things that we're trying to work on, I'm not just taking it back and through.

"But my putter felt great, which is huge to start your first tournament back and not really feel like you have to work much on putting, other than getting the speed down.”