There was another maiden winner in Germany as Adrian Otaegui produced a stunning comeback to defeat home favourite Marcel Siem in the Paul LawrieMatch Play. The Spaniard, who entered the Match Play on the back of four consecutive top-2o finishes, was three down with eight to play. But birdies at 16, 17 and 18 were enough to defeat Siem, who looked in total control at the turn. 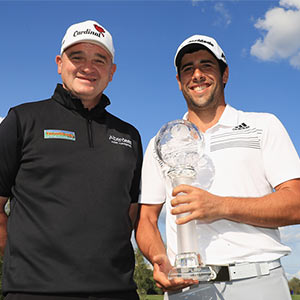 Otaegui was the form man heading into the final having not been taken down the last hole in any of his first five matches. Standing on the first tee in the final, Otaegui was 28-under par for the tournament thanks to 31 birdies and an eagle along the way.

“It’s very, very special to have my first European Tour victory here at the Paul Lawrie,” he said. “I’m so happy. The way I played the back nine being three down after nine holes, I played good golf.

“Obviously Marcel missed a couple of shots but I was very, very focused, I knew I could do it and the way I finished was just the perfect finish to the week.”