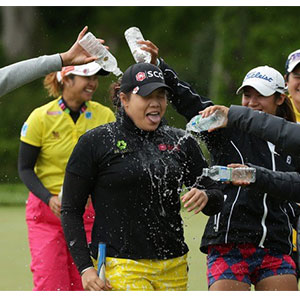 Ariya Jutanugarn claimed her second straight victory after a closing 67 gave her a one-shot win over of rookie Su Oh of Australia.

Gerina Piller of America and Korean Sei Young Kim finished tied for third. Lexi Thompson was in a share of fifth.

Jutanugarn became the first Thai player to win on Tour recently and four birdies on her front nine paved the way for back-to-back wins.

Oh, who turns 20 on Monday, sank a long birdie putt from the fringe on the 18th to get within one of the lead which meant Jutanugarn needed a par at 18 to seal the victory. She missed the green right but chipped up to six feet and holed the putt.

“I didn’t feel pressure. I just feel like whatever it is is fine because I just really want to have fun. I know they play good, but I’m not really care about them. I really worry about like what I want to do more.”