The making of an Open champion

Jordan Spieth will likely never have a day like it, but he emerged from some very strange surrounds to become an Open champion, writes Mark Townsend.

The first person I spoke to on Open Sunday, maybe the best golf tipster in the game, suggested that a six-shot win for Jordan Spieth might not be the worst bet in the world. We reminisced about the likes of Rory McIlroy, Martin Kaymer and Louis Oosthuizen in recent times and left, in agreement and rather pleased with ourselves, that there would be more of the same to come here.

And then Spieth, who was bogey free for two of the first three days, frittered away three shots in the first four holes. He reached the turn in 37, he was back at eight under and then maybe the strangest hole in major golf took place at the par-4 13th.

We seemed to have been building up to this moment; short putts missed, the hand coming off the club at regular intervals and some horrible pulled shots. But little could have prepared us for the distance that Spieth missed the fairway at 13 and the time it then took to complete the hole.

It was 29 minutes from the time his hands clasped his head in disbelief on the tee to when he knocked in the 10-foot bogey putt. In between that it was pandemonium as Spieth, once he had decided to take a penalty drop from some deep bund, hopped from one Tour truck to another in an attempt to find some line-of-sight relief. Spieth remained brand loyal, doing most of his jumping around by the Titleist truck, and, in time, Royal Birkdale will have a new plaque – but this one will sit on the practice ground where the American finally settled on his drop. 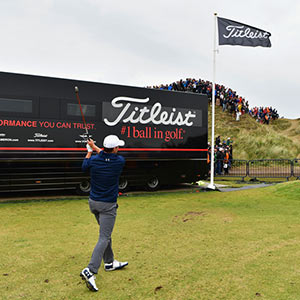 He hit it with his driving iron, and then hit it again, and then made the putt. Matt Kuchar’s regulation two-putt par gave him a one-shot lead in the Open with five holes to play and he might never have felt so disillusioned on a golf course.

All of which will have been good practice for what was to come. How Spieth made that bogey was all left looking fairly ordinary as he nearly holed his tee shot at the 14th, then knocked in the most perfect eagle putt – a fairway wood from 257 yards finding the 15th green. The 20-footer at the next fell in on its last roll.

Kuchar made his birdie at the penultimate hole, Spieth’s six-footer, by now, was a gimme. A third major was in the satchel – Spieth turns 24 on Thursday and will go for the career Grand Slam at the US PGA.

How to follow a year like Spieth had in 2015? In short, you don’t. Spieth nearly won the Grand Slam two years ago – having picked up the first two majors he then came up one shy of a play-off at St Andrews and three back of just one other player, Jason Day, at Whistling Straits.

It was phenomenal and, coming so soon in his career, it provided an unlikely benchmark for his golf to be measured against. The putts couldn’t keep dropping in like they did, he couldn’t keep scrambling like he had, his time would be nothing like his own any more.

In 2016, a year where plenty wrote him off, he won ‘only’ three times around the world. How it wasn’t four, given the lead he had built up at Augusta, only he will really know.

But he answered all the questions and, if there was any doubt as to whether he had properly come out the other side of that Masters mess, then he surely has now. And how different this could all have turned out.

Speaking with a handful of American journalists who follow the PGA Tour round I asked, in one word, who was going to win?

The same one word came back to me – ‘Spieth’. After the Byron Nelson in late May Spieth was officially the seventh best player in the world after missing the cut courtesy of a late quadruple bogey, his second straight blank weekend after Sawgrass, and yet, two months later, he was the first name to leave everyone’s lips.

The easy assumption is that the putter must have become red hot again? Spieth wins, supposedly, because he makes a boat load of putts. This year he has won twice, the last at the Travelers in his last start four weeks ago, and contended regularly despite the putter. That said he didn’t even get to use it in the play-off with Daniel Berger after holing out from the sand.

“I thought Hartford was big. I went in and I knew I didn’t feel great with the putter, and it’s been kind of off and on this year and was able to win feeling really poorly with putter and that’s never happened before, going back to junior golf,” he revealed earlier in the week.

It also overlooks the fact that he leads the PGA Tour in strokes gained/approach-the-green – the part of the game where some believe Spieth to be quite ordinary.

“It isn’t a swing change, I feel like I’m more physically fit than I have been and it’s allowing me to consistently get around my body better. And once you start hitting those shots more consistently, you start even dialling it in more and more. And so my groupings on iron shots, if I’m with Cameron (McCormick) having a lesson, they are tighter than they’ve been in past years, working different ball flights and trajectories. Out here that’s what you need.”

And you also need what Spieth has in absolute buckets, the bit between the ears. He copped the wrong end of the draw yet shared the lead on day one and on his own going into the weekend.

The lead going into Sunday was three and we all thought it would be a cakewalk. That couldn’t have been further from the truth.