Unstoppable Johnson on top of the world (again)

Dustin Johnson is breaking more records as he picked off a third straight win and a fifth WGC at the Match Play.

While 2016 was a standout year for Dustin Johnson the follow-up is promising even more following his victory in the WGC-Match Play in Austin.

Last year Johnson ticked off his first major at the US Open and he will head to Augusta as one of the strongest favourites there in recent times; his finishes this year on the PGA Tour this year have been 6-MC-3-W-W-W. He also had a brief dalliance with the European Tour in Abu Dhabi where he finished second behind Tommy Fleetwood.

It looked like being a procession for much of the day, in the end it went down the final hole. Had he won, Spaniard Rahm, the No. 21 seed but for many a future No. 1, would have got inside the top 10 to become the third quickest to achieve such a feat – this was his 39th week on Tour, Sergio Garcia did it in 37, Tiger Woods in 33. But he didn’t and, in truth, he was fairly desperate on the front nine as Johnson raced into a five-hole lead.

Rahm was a picture of frustration and when he did get a slice of luck, as he did at the fifth when his pacy chip-and-run struck the pin, he missed from three feet. At the seventh he putted it off the green but then holed the return to avoid losing five holes on the trot. Johnson simply added another win at the next.

There was some brief respite as the American bogeyed the next two but the par-5 12th ended much of the resistance, or so everyone thought. The pair produced drives that combined a ridiculous 862 yards but the Spaniard missed the green with a wedge from 149 yards and then missed a putt from five feet. Johnson, as he did all week, did the simple things brilliantly and two-putted for his birdie. Astonishingly he was never behind all week.

Rahm showed his undoubted class by driving the 13th and two-putting for his first birdie of the afternoon to get back to three, he added another immediately with a beautiful pitch but his rhythm deserted him again with a shoved tee shot at the 15th. 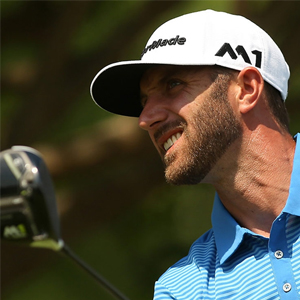 Only Rahm then played a miraculous – lucky? – recovery and drained a 32-footer to get back to one and he stood on the 17th tee just one down, two hours previous he had been five in arrears.

The Spaniard got up and down to take the match down the 18th and he bulleted a driver through the back of the green which was some 382 yards away – it was his first visit to the hole – Johnson sticking to his game plan and playing an iron. Advantage Rahm.

But then, after the American’s wedge had come up short, Rahm’s chip did likewise after he was put off by a door slamming in the midst of his shot and he left himself a curling putt that was never going in. One final five-footer for the Spaniard but Johnson popped in his tap-in and, with it, top spot in the FedEx standings.

No one was as complimentary of Johnson as Rahm: “What am I going to say that you guys don’t know?” he told reporters. “If his putter had been hot, I wouldn’t have had a chance, no question.

“It’s amazing how he’s able to keep cool the entire round. It amazes me. And he’s just a perfect, complete player.”

Johnson, meanwhile, was typically concise when analysing his round: “Pretty good,” was his simple response when asked how it felt. “That was a tough day, a long day. I’m proud of the way I played, the way I hung in there.”

He then fired a warning to his rivals for the Masters title: “If I’m playing my best,” he said, “I’ll play against anybody, anytime.”

Elsewhere on Sunday, Bill Haas won the third-place play-off at the 17th, but the highlight of the day belonged to Hideto Tanihara who grabbed a hole-in-one on the par-3 7th.