Walker Cup format is intense and for the purists

The Walker Cup format meant it was a sprint in Los Angeles as GB&I's amateurs took on their American counterparts. Despite the lopsided score line, it made for compelling viewing.

You wait two years for a Walker Cup to come along and then the first match is over in 11 holes and two hours.

Alfie Plant and Harry Ellis, the European and British Amateur champions respectively, watched their opponents birdie the first four holes. It was no disgrace to find themselves four down.

As is so often the case, though, when reeling from such a start, it did not require such brilliance from the American pair of Collin Morikawa and Norman Xiong to close out an 8&7 win.

The birdie-less GB&I top pair threw in four bogeys and that was that.

At least Ellis got the chance to redeem himself on Saturday afternoon. Plant knew before he went out that he was not involved in the singles and so that was that for the day.

In fact, he didn’t reappear until the final match of the contest, in the Sunday singles. Such is the brutal reality of the Walker Cup, an event that our leading amateurs routinely delay turning professional so that they can experience.

In fact, it’s considered bad form, a golfing solecism, for an up-and-coming star to turn pro before autumn in a Walker Cup year.

Yet the experience can amount to as little as a couple of abridged matches and a heavy defeat for the team.

Who knows, by the time a player makes the switch to the paid ranks his form may have deteriorated. The chances of that precious fast start to professional life are diminished.

Those who go on to win majors, a group that in recent times includes the likes of Rory McIlroy, Dustin Johnson, Danny Willett, Webb Simpson, Justin Thomas and Jordan Spieth, talk with great fondness about their Walker Cup experience.

Others, perhaps, who never quite make the grade as tour pros, might think differently. 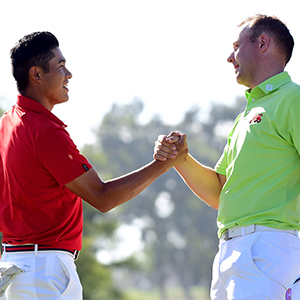 Two days, four sessions – and two of those are foursomes. It’s singles each afternoon in the unique Walker Cup format.

Fourballs? Forget it. This is amateur golf – proper golf, as its advocates would have it.

Eight players play in each of the first three sessions. All 10 team members take part in the closing singles.

Once the action finally begins on Saturday morning, the pace is breathless. Thirty-six hours later and 26 points have been shared between the two teams.

We consider that anything less than 72 holes of strokeplay is insufficient to decide a worthy champion.

Yet with the Walker Cup format, countries and continents can win or lose in two days.

Sometimes, though, less is more. It’s a reminder of the days when, as a sports fan, you had to wait for your next dose of action.

The Walker Cup is an acquired taste for golf fans. Many of whom, let’s be honest, will never even notice this match is on, especially given the late West Coast finishes.

But those who engage with it tend to find themselves gripped. To spectate at, this is perhaps the best event in the game. You can get so close to the action and watch major champions of the future.

Better still, every shot counts. As the Walker Cup legend – both as player and captain – Peter McEvoy puts it, fourball at the highest level is a lottery.

It’s just foursomes and singles in the Walker Cup format, which means that games move along quickly and each player is exposed – for better or for worse.

This is golf for the purists. As each player’s soul is bared you find new faces quickly become familiar over the course of the weekend.

You can’t help but feel you have identified a future US Open champion. While silently writing off the chances of a half dozen others of ever making a career for themselves in the pro game.

These snap judgments are rarely correct.

Which is why you shouldn’t write off Plant just yet.

Unfortunately, that opening match proved to be a sign of things to come and GB&I, though game, were soundly beaten.

Thanks to the Walker Cup format, by the time the chipper Sundridge Park man got chance to make amends for that hammering in the opening match, the contest was as good as over.

Two months ago he was winning the Silver Medal at Royal Birkdale. Here he was reduced to the Walker Cup’s equivalent of the graveyard shift.

Not that it got much better, as he ran into Maverick McNealy, arguably the US’s most accomplished player, and was seen off 4&2.

The Walker Cup format can certainly be cruel. But that’s what makes it compelling.