Why this could be the best Masters in years 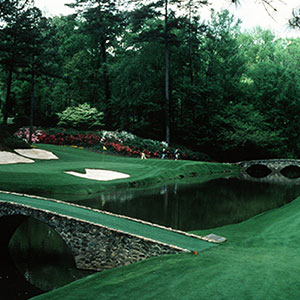 This is going to be the most eagerly anticipated Masters for years but for a variety of reasons.

Let's start with the one that has been around since Rory 2 putted the final green in near darkness last August to win the U.S. PGA championship at Valhalla.

His fourth major championship was also his third different major meaning that to complete a career grand slam,a trip to Augusta in the spring of 2015 would give Rory the opportunity to become the sixth player ever ( Sarazen,Hogan,Nicklaus,Player and Woods) to complete this incredible feat at the age of 25!!!!

That time is upon us and the boy Mcilroy is at a venue that perhaps suits him more than any other in the world.Long powerful drives,stratospheric iron shots,major know how and plenty of heart all put Rory on the front grid.

He knows he can play well here,he could have won in 2011 until he got Augusta'd around the turn,he could have won last year when he finished 8 behind Bubba having played the par fives in level,he can win this year.He will tee off as the emphatic world no 1 at the layout that's made for him and if the lessons of the past have been learnt and his misses are in the right place then he's going to take some catching.

I for one would love to see the career slam achieved and there is still more gravy if Rors comes out on top and that is that he will have three major trophies on his mantle piece with a trip to Chambers Bay in June to see if he can complete the Rory slam with four consecutive major victories!!! No pressure then.

Another reason for fireworks this year are the emerging homegrown talents stateside that come to Augusta with a real chance.

Patrick Reed and Jordan Spieth the picks. Patrick the lippy one with early protestations that he was a world top 5 player,initially making golf's glitterati balk at his words but has now shown everyone that he is here for the long haul,racking up wins on the PGA tour and displaying a lot of fight at the last Ryder Cup.Reed is a big time player and plays the game with a strong natural draw which is a huge advantage at Augusta.He unlike a lot of other players is not going to have to "Find the draw",it's there already so with his natural game,if he has a good week,he will contend.

So too will Jordan Spieth,runner up to Bubba last year and still only 21. Time and time again he has shown the ability to recognise a bad habit or personality trait and address it and fix it and consequently improve rapidly.

That process continues and he comes to Augusta National in great form narrowly missing out at the Nelson last week in a play off.He is also a club longer this year and that can't hurt at the Masters where power is often rewarded.

Last weeks winner JB Holmes is back to his best but hasn't strung it all together in a major yet and being a fader of the ball as a right hander,he will be looking for some raking draws on tap,his play style to quote Van Gaal will be an interesting watch.

Another name to monitor is Dustin Johnson.He was away from public scrutiny for 6 months in we are told a self imposed exile.Then he pitches up and loses in a playoff in Riviera and follows that with a win at the Cadillac in Miami.This is a guy with incredible physical gifts and no mean golf game and I would be astonished if he didn't contend this week as I would be astonished if Bubba,the defending champion did not have a good tilt at retaining his green jacket.I talked about how Augusta was made for Rory,well it's perhaps made even more for the left hander.Bubba's wipe fade that goes miles will always be easier to control than a right hander drawing the ball and when he's finished playing,you can bet that there will be more than two green jackets clogging up his suit rail at home.

So lots to look forward to and there is the small matter of Tiger Woods reappearing on a golf course after taking time away from the game. He comes to the year's first major with no form at all,in fact off the back of playing the worst golf he has ever played not only from the tee box but with what can only be described as the yips with the short game. Anybody can scuff a chip but the world will be watching Tiger's first chip shot and then the rest of them to see if it was just "release patterns" that were causing the duffs or is it something more sinister. I wish him luck because the tightly cut fairways and surrounds at Augusta can be unforgiving under the spotlight.

My top 5 are Rory,Bubba,Dustin,Jordan and Patrick. Enjoy the Masters.