Rahm makes is five wins since turning pro less than two years ago. Check out the TaylorMade clubs he used to thrill the home crowds in Madrid.

That’s now three European Tour victories to go with his two PGA Tour titles – not bad for someone who turned pro less than two years ago.

It was also Rahm’s second victory since switching to the new TaylorMade M4 driver earlier this year.

The 23-year-old had previously used the TaylorMade M2 but made no hesitation in upgrading to its replacement.

He averaged 304.5 yards off the tee during the tournament on his way to a finishing score of -20, two shots better than Ireland’s Paul Dunne.

“It’s such a satisfying feeling,” he said.

“When I made the decision to come straight from Augusta it wouldn’t be to just show up and walk around, I wanted to win this tournament.

“I’ve been blessed to be national champion from 16 to all ages in Spain.” 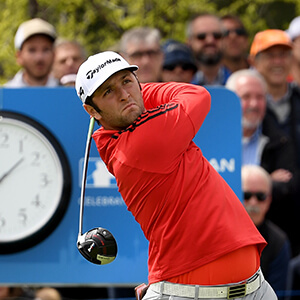 “To round my amateur and pro career together in this way and win the last one I had to win and join that prestigious list of Spanish winners, it’s hard to explain how good it feels and how satisfying it is.

“You can tell how excited everybody is, I felt that tension, I felt that stress, I felt everything magnified. They played a huge part, I came for them mainly so I’m just glad I can win this one for the Spanish people”

Rahm opts for an M3 fairway wood which has an adjustable weight to fine tune the ball flight.

He carries a P790 UDi driving iron which are now available to buy.

Rahm then goes into the P750 irons which are slightly more compact than the P770.

Rahm, like nearly all of TaylorMade’s big staff players, were quick to put the new Milled Grind Hi-Toe 60˚ wedge into play.

The Spider Tour Red putter has been a weapon for Rahm over is phenomenal two years and he favours the TP5x ball.