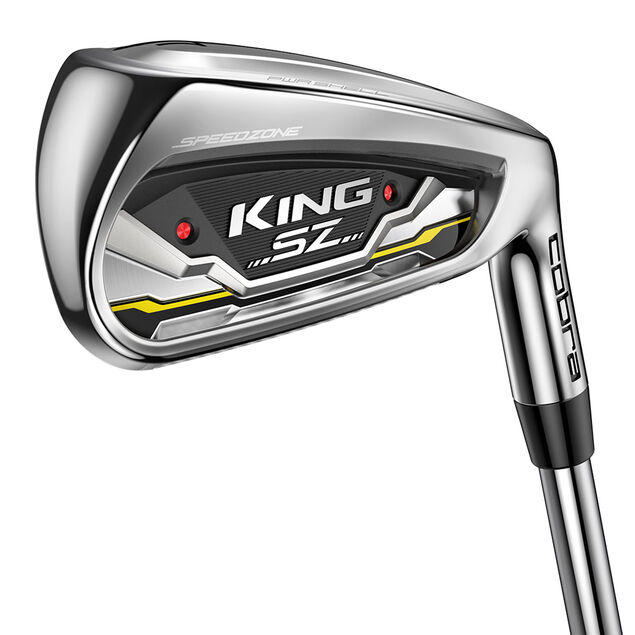 The new Cobra King SPEEDZONE irons deliver the best performance, with 5 unique zones of innovations to deliver the optimum blend of distance, consistency and forgiveness.

SPEEDZONE irons have taken inspiration from some of the fastest cars in the world, that's why Cobra has introduced lightweight carbon fibre into the topline and underneath to deliver ultra-low CG and greater ball speeds. To keep all that speed under control Cobra engineered the head with a wider body around the perimeter of the club that increases MOI and assists to lower CG. This provides a performance iron that is both forgiving and accurate.

Cobra`s patented PWRSHELL Technology continues to push the limits of speed and improved launch to give you the power to reach your target. With an all-new forged PWRSHELL face and updated E9 face structure that helps to lower the CG and create more return through a deeper undercut speed channel. The design also features a co-moulded medallion which absorbs unwanted vibration to provide a satisfying feel and sound at impact.

The set is optimised with 100% CNC milling and progressive spin technology throughout the set. The 4-6 irons have v-grooves to reduce spin for more distance performance, and the 7-PW are utilised with u grooves which generate more spin for control where you need it the most. All other wedge based irons offer maximum spin grooves for greater control around the greens.
Code: 355580